Clinicians see many skin conditions in the primary care setting. Medscape talked with a primary care clinician, Charles P. Vega, MD, and a dermatologist, Temitayo A. Ogunleye, MD, to learn their thoughts on how to best diagnose and manage dermatology-related symptoms in primary care. This consultation is the second in a series addressing these common concerns.

Dr Vega: This case is a 63-year-old woman with a chief complaint of “This mole looks strange.” I’m worried when I hear that. My antennae are already up. The patient had this nevus on her right calf for years, but her previous physician looked at it and told her there was nothing to worry about. She thinks it has been growing a little bit more proximally over the past 3-4 months, but she clarifies, “Well, maybe I’m just crazy.” She has no symptoms associated with the mole, but I’m concerned. Tayo, what do you think?

One of my key rules for deciding whether to biopsy something is to listen to what the patient tells me.

Dr Ogunleye: I agree, and I am concerned too. One of my key rules for deciding whether to biopsy something is to listen to what the patient tells me. Even if I look at a mole and I think that it looks okay, if a patient is telling me that it’s growing, I’m probably going to remove it. Similarly, if a patient tells me that it is symptomatic (itching, painful, or bleeding), I’m probably going to remove it. I think that in general, when I think about moles and when to biopsy, if a patient is reliable and seems to be telling you very pointedly that something is changing, then I always think that you are safer by going ahead and doing the biopsy.

Dr Vega: Yes, absolutely. I think that primary care clinicians should certainly stick to this rule using the ABCDE criteria: asymmetry, border, color, diameter, and the E—evolution. Maybe we’re not as familiar with evolution but I agree with you that it is really important. If a mole is changing, that’s very, very concerning. 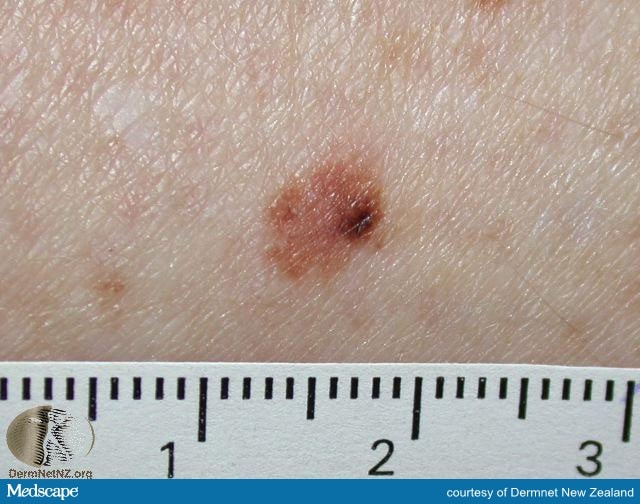 Figure 1. An atypical nevus. Note the small area of darker pigmentation. If this nevus were notably different from the rest of the patient’s nevi or represented a change in the nevus, biopsy should be considered.

You also have to think about where a mole is on the body. This one is on the patient’s calf, and that is an area with some risk for melanoma. The other factor to consider in someone who has traditional risk factors—fair-skinned, a variety of nevi—is to look for the mole that looks different. The “ugly duckling” phenomenon is very important. Those “different” nevi certainly need strong consideration for biopsy.

Tayo, a related question: Should a patient such as this always be referred to dermatology? Or do you think it is reasonable that an evaluation with potential biopsy is done in the primary care setting?

Dr Ogunleye: I think a later evaluation with dermatology, with biopsy in the primary care office, is reasonable. I also believe the choice of where to do the biopsy is dependent on the skill of the primary care physician. If the primary care physician is comfortable doing biopsies, then I would say that it’s perfectly reasonable for a biopsy to be done in that setting. In the current landscape, where the wait time for many subspecialties, dermatology included, is sometimes longer than desirable, I think it’s very acceptable and probably beneficial to the patient to have concerning moles biopsied in the primary care office. The only caveat to that would be that the office should have a dependable dermatopathologist/lab to send specimens, because the interpretation of the biopsy is very important.

Dr Vega: Yes, absolutely. I believe many patients looking for a solution are also doing research online. There are apps that will match a mole up against a database of moles and try to find features that might look like cancer, but these apps are unregulated. I don’t know if you have any experience with those, Tayo, but I’m very hesitant to recommend such apps as that because I don’t understand how much effort went into the technology or the sensitivity, specificity, and positive predictive value. Do you have any experience with apps such as this?

Dr Ogunleye: No, not personally. I would say that in general, I don’t recommend the use of those tools for patients. However, the ugly duckling phenomenon is probably one of the key things that I tell patients about, because I think it’s easiest for them to follow.

Part of the problem with the ABCDE criteria is that not everyone’s moles are going to fit. I often explain to patients that they should be looking for that unusual mole. And remember that a mole can be an ugly duckling as far as behavior or appearance. It may be a mole that doesn’t look like other moles, or it may be a mole that is different in behavior—it’s itchy, painful, bleeding, growing, or changing color.

I also recommend that if a primary care physician sees a mole and thinks that it’s okay, one option may be to take a photograph of it. The patient can also take a photo of the mole on their phone, and if you have the capability, download the photo to the patient’s chart. Then, you might review that mole again in 3 months so you have an objective measure to compare the mole with when the patient returns to your office.

Dr Vega: Yes, I’ve tried documenting moles by drawing them. However, I come up with these very large blotches that definitely look concerning because by the time I’m done drawing it, a 6-mm lesion looks like it involves half a leg! A photograph sounds like a much better approach.

Biopsy is obviously going to be more definitive in terms of making a diagnosis. In case like this, when we are worried about melanoma, I’m concerned about getting enough depth on my biopsy. What is the best procedure for biopsy in cases of suspected melanoma?

My general rule is that if you are going to biopsy a mole… your goal is to get clear margins the first time, so that you don’t have to go back again and do further procedures.

Dr Ogunleye: I think it depends on the size of the lesion. You can do a shave or a punch biopsy. The issue with punch biopsy is that the largest type of punch biopsy is usually 8 mm. Some moles are going to be larger than that, and you are not going to be able to get clear margins on the mole.

My general rule is that if you are going to biopsy a mole—whether or not you think it’s a melanoma or even if you believe it’s just an atypical nevus—your goal is to get clear margins the first time, so that you don’t have to go back again and do further procedures. If you can get around a mole with about a 2-mm margin, then doing a punch biopsy is fine. Otherwise, a shave biopsy is usually acceptable.

From a primary care perspective, if a clinician is not as familiar with shave biopsies, then punch biopsies should be fine. Especially in the case of a melanoma, the most important criterion that we are looking for is the depth of the melanoma. In that situation, doing a punch biopsy may be fine, even if you cannot get clear margins.

Dr Vega: I also want to return to the point you made about potential wait times to see a subspecialist. With the potential for melanoma, I believe it is better to get a biopsy done while the patient is waiting those 3 weeks to get in to see the dermatologist. Four of those days could be processing the biopsy specimen. Obviously, it’s of great help to the dermatologist to have a tissue report when the patient arrives in his or her office. As an aside, be sure that the biopsy results get to the patient and to the specialist before that dermatology appointment. That’s really going to make this case progress along much more efficiently.

Dr Ogunleye: I agree. If you’re comfortable performing a biopsy, then biopsy. However, sometimes you’ll get patients who will come in with really large moles. There’s no way that you’re going to get around those with a punch or shave biopsy. In those situations, sometimes it’s okay to just biopsy the most atypical area of the mole—an area that’s really dark, discolored, or nodular. You might biopsy that portion of a larger lesion, because that still might give you enough information to make a diagnosis.

Dr Vega: All right—get those punch biopsies and scalpels ready, everybody. Thank you very much, Tayo. I look forward to speaking with you again.